Do you have a passion for helping people in pain and distress? If you want to become a doctor, you will need to invest a great deal of time and effort to develop the skill-set required for this job.

Doctor Salary Trend in the U.S.

There are various specializations within the profession of a doctor. For instance, doctors can specialize in a particular area of medicine and work as Anesthesiologists, General Internists, Obstetricians & Gynecologists, Optometrists, General Pediatricians, Surgeons or as Veterinarians etc. The following bar-chart represents a detailed comparison of the national annual mean salary trend for afore-mentioned specializations of doctors from
2016 to 2018. 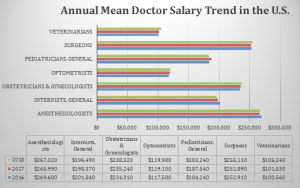 This bar-chart clearly illustrates a gradual and stable increase in the annual mean salary of Obstetricians & Gynecologists, Optometrists and Veterinarians from 2016 to 2018. However, a decrease can be observed in the annual mean income of General Internists. Furthermore, the annual mean salary of General Pediatricians improved in 2017 but declined in 2018. On the other hand, the annual mean income of Anesthesiologists and Surgeons faced a decline in 2017 but eventually rose back up in 2018. Based on these figures, it can be deduced that the overall field of medicine offers some really great and high-paying opportunities.

Doctor Salary Comparison of Top Paying States in the U.S.

The following chart paints a clear picture of the top paying states of the U.S. with reference to afore-mentioned specializations.

In 2018, the U.S. Bureau of Labor Statistics did not report an exact figure for the annual mean income of Surgeons in Wyoming, Obstetricians & Gynecologists in West Virginia and Anesthesiologists in Oregon. Instead it reported that the annual mean salary of these doctoral specializations was greater than $208,000.

What Is the Career Outlook of a Doctor in the U.S.?

As per the data reported by the U.S. Bureau of Labor Statistics in 2018, a rise of 7% employment growth for Physicians and Surgeons is expected over the decade i.e., from 2018 to 2028. This employment growth rate is supposed to be much faster than the average for other occupations.